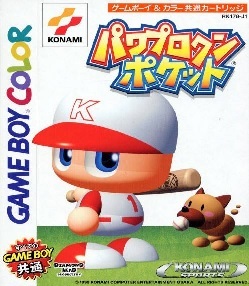 Power Pro-kun Pocket is a 1999 Baseball simulator + visual novel developed by Diamond Head and published by Konami for the Game Boy Color.

The Baseball gameplay in this and the following game is rather primitive, with outfielders and runners being automatically controlled by the CPU. However, that's not exactly the point of the game.

As had been done in the main Live Powerful Pro Baseball games since 3, the game features a two hours long "Success" life simulator mode in which the player must both manage the protagonist's routine as the story goes on and win Baseball matches at critical moments.

It has several possible endings, and a successful run awards the resulting character to be used for build extra teams. Those characters can also be transferred to Pawapuro 6 on the Nintendo 64. The game and its sequel received a compilation remake in the engine of Pawapoke 6 for the Game Boy Advance in 2004.

"Hero 1" is a high schooler who dreams to make it big in Baseball. However, the school he transfers to, Gokuaku High ("極亜久高校", meaning something like

"Heinous", "Badass" or "Extreme" Highschool), is run by nefarious delinquents who sabotage their opposition.

When their decrepit club collapses, the senior staff are sent to the hospital and Hero 1 becomes the new captain. He must then convince his classmates to join his team and take them to victory at Koshien, all while dealing with a criminal conspiration involving the Propeller sports organization.