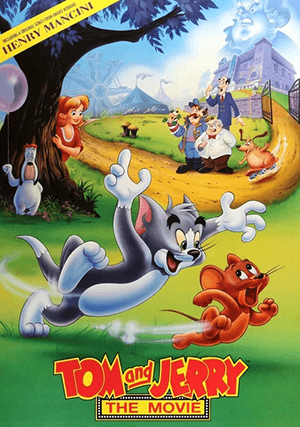 Puggsy: The name is Puggsy. What's yours?
Tom: I'm Tom.
Jerry: I'm Jerry.
(both do a Double Take)
Both: YOU TALKED!
Tom: Well, sure I talk. What do you think I am, a dummy?
Jerry: You said it, I didn't.
Tom: Ah, you little pipsqueak! I oughta... hey...! How come you never spoke before?!
Jerry: Well, there's nothing I wanted to say that I thought you'd understand. And there still isn't!
Tom: Alright, that does it! You little.. .boy, you get me angry...!
Puggsy: Ah, ah, ah. I told ya before, you guys have gotta learn to be friends.
Advertisement:

A 1992 feature length Tom and Jerry film released during The Renaissance Age of Animation, directed by Phil Roman. Joseph Barbera was consultant on it.

The film starts with Tom and Jerry going off on their own after their home is demolished, only to discover that they can talk — and sing — as they become friends. They encounter an orphan girl named Robyn Starling, who becomes the main figure in the story as our cat and mouse duo try to help her find her father who enjoys dressing up as Indiana Jones, while evading her greedy, evil Aunt Figg and her lawyer Mr. Lickboot. And then there's the dog on a skateboard, two dogcatchers who look like either burglars or Mexican wrestlers, a performing ship captain and his puppet parrot, and a doctor who kidnaps rich pets and holds them for ransom... Oh, and a cameo from Droopy.

It was the first and only theatrical feature-length Tom and Jerry film for many years until a new live-action/animated film was announced to release in 2021; subsequent feature-length films between those two would go Direct to Video and typically stay closer to the original formula of Tom and Jerry's rivalry.

Tropes used in this movie include:

When Tom and Jerry start to befriend each other, they start to speak their first words.

When Tom and Jerry start to befriend each other, they start to speak their first words.