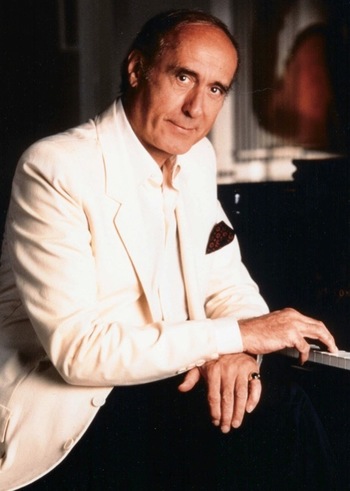 The Mancini name was synonymous not only with great motion picture and television music but with fine recordings and international concert performances as well. Over the course of his career he was nominated for an unprecedented 72 Grammy Awards (winning 20), 18 Academy Awards (winning four), ten Golden Globe Awards (winning one), and two Emmy Awards.

Born in Cleveland, Ohio and raised near Pittsburgh, Pennsylvania, Mancini was first introduced to music by his father, an avid flautist, at the age of eight. He took up piano at age twelve and within a few years had become interested in arranging. After graduation from high school in 1942, Mancini enrolled in New York's famous Juilliard School of Music but his studies were interrupted by a service draft call in 1943 where he served overseas in the Air Force and later in the infantry. Following his release from the Armed Forces in 1946, Mancini joined the Glenn Miller-Tex Beneke orchestra as a pianist/arranger. In 1952, Mancini joined the Universal International Studios music department. During the next six years he contributed to over 100 films, most notably The Glenn Miller Story (for which he received his first Academy Award nomination), The Benny Goodman Story, and Orson Welles' Touch of Evil.

Henry (or "Hank") Mancini scored the music for numerous films from the 1950s until the early '90s. During this time he frequently teamed up with director Blake Edwards. Perhaps because of this the films he worked on tended to be light-hearted stories, even the thrillers being more like romantic comedies, and his light Jazz style was very suited to this type of film. Although there are rarely any dark moments in Mancini's music, there is a wistful sadness to some of his songs. For these songs Mancini would frequently team up with lyricist Johnny Mercer, for example on Breakfast at Tiffany's, Days of Wine and Roses, and Charade.

Mancini's musical background was in jazz bands, and before his work in films he spent a few years writing for TV series such as Peter Gunn and Mr. Lucky. His background in swing bands made him ideally qualified for two of his earliest film scores "The Glenn Miller Story" and "The Benny Goodman Story". In these and other films, the Mancini style is frequently more akin to Big Band than the symphony orchestra sound. His orchestration will typically include a drumkit perhaps with brushes and a Latin percussion set, the lead tunes are very often played by Trumpet (think Herb Alpert) or Saxophone with occasional flute or voices, perhaps accompanied by bass, guitar, tuned percussion, and a tinkling Lounge Lizard easy-listening piano. The tunes may employ Latin rhythms or Blues-influenced chords and melodies, augmented with Jazz-style improvisation riffs on various solo instruments. Among the session players that worked regularly with Henry Mancini, were pianist/composer John Williams and bassist Abraham Laboriel.

The one thing which makes Mancini's music memorable is simply the good tunes. In many ways, a Mancini soundtrack is more a collection of tunes or songs rather the "background" music of other composers. This was intentional since Mancini (unlike most film composers) usually negotiated to retain the rights to his music in order to re-release it on albums. His facility as a tunesmith has produced theme songs (full of affection), and instrumental themes (full of humour) which people have been humming and whistling for decades. Among his many well-known tunes that have stood the test of time are items like "Peter Gunn"

and "The Pink Panther"

as used in Breakfast at Tiffany's and "The Baby Elephant Walk"

Perhaps the most bizarre credit on Mancini's résumé is the theme tune to the 1990 revival of Tic-Tac-Dough.

He passed away on June 14, 1994, in Beverly Hills, California, but his musical legacy still survives and will influence many generations to come such as recent counterparts David Newman and Michael Giacchino.