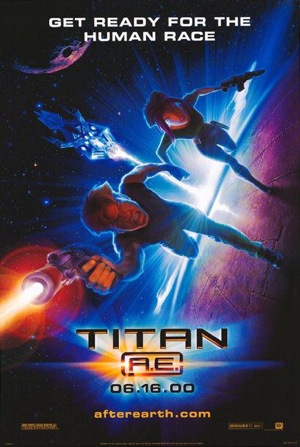 Titan A.E. (for "After Earth") is an animated science fiction film released in 2000 and directed by Don Bluth, his last film before semi-retiring from filmmaking.

In 3028, humans create the Titan, a huge spacecraft representing the very pinnacle of human achievement. Threatened by humanity's potential, the Drej, a race of Energy Beings, attack and destroy Earth. The Titan manages to launch and escape, but it disappears far away in the aftermath, along with its primary creator Professor Sam Tucker (Ron Perlman). The humans who survive the destruction of their planet become the homeless of the galaxy, living as laborers for alien species or on cobbled-together drifter colonies. Fifteen years later, Professor Tucker's son Cale (Matt Damon), a salvage yard worker, is recruited by Captain Joseph Korso (Bill Pullman), who reveals that the professor encoded a map to the Titan in the ring he gave to Cale years earlier, and that all depends on finding the Titan. When the Drej attack the salvage yard, Cale is forced to escape aboard the Valkyrie with Korso and his crew: pilot Akima (Drew Barrymore), first mate Preed (Nathan Lane), munitions officer Stith (Janeane Garofalo), and ditzy scientist and navigator Gune (John Leguizamo). Together, they set out to find the lost Titan and restore hope to humanity, all the while being hunted by the Drej.

Titan A.E. received mixed reviews from critics and was also a commercial disaster, leading to the closure of Fox Animation Studios, and proved to be the final nail in the coffin for Bluth's already floundering career, forcing him into retirement until 2015. In a case of Dueling Movies, the superficially similar Treasure Planet released a couple of years later also flopped badly, taking funding for traditional Western Animation along with it. A variety of explanations for the film's failure have been suggested:

The movie eventually managed to find an audience, and has become something of a Cult Classic. It is worth watching for its impressive visuals, cheerful willingness to embrace and lampshade sci-fi tropes, and the wittier parts of the script.

It was the final traditionally-animated film created by 20th Century Fox's animation studio until The Simpsons Movie in 2007.