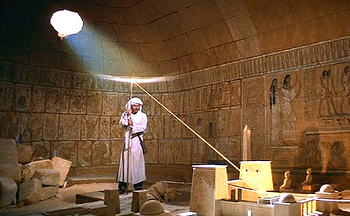 "Put the staff in a certain place at the right time, and it will give you the exact location of the Well of Souls."

To track down a secret site or object, characters must observe a beam of sunshine or moonlight, or a shadow cast by such light, which indicates its location. Often this is only possible at a specific time of day and year, although this limitation may be ignored for plot convenience. That said, the idea that you have to race to get the right Plot Coupon to the right place at the right time (which will always be really soon after you find it) makes for great drama, especially if you're racing someone else to be there at the right time. A popular variant is for a character who's good at math to work out where the shadow would be pointing on the right day.

If the right day is specifically required, expect a cloudy sky to clear up at the last possible moment, so the characters won't have to wait a year to watch for it again. If the path for the light has obstacles, this trope may be combined with a Light and Mirrors Puzzle.

Related to Solar-Powered Magnifying Glass. Technically related to Total Eclipse of the Plot, in which the cast shadow of significance happens to be really big.