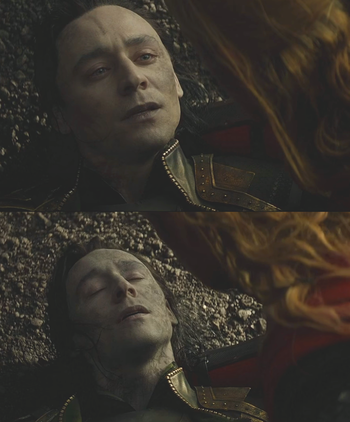 A rather low key death.
The polar opposite of Dies Wide Open. A character gently closes their eyes as they die. They may also slump a little. May result in Peaceful in Death.
Advertisement:

Named for the novel and movie, The Big Sleep.

Subtrope of He's Dead, Jim. If someone is actually sleeping, only metaphorically like the dead, see Deep Sleep.

Compare Passed in Their Sleep, where a character dies in their sleep, with their eyes closed, and Eye Lights Out, where the dying character's eyes slowly go dark.