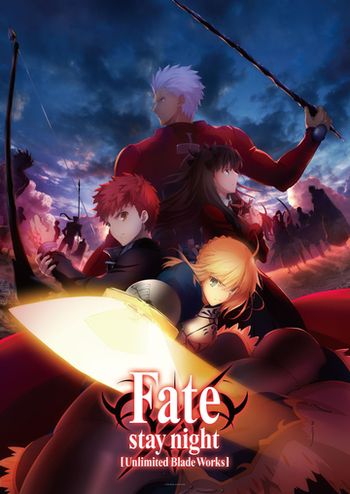 At the end of the fourth Holy Grail War, Kiritsugu Emiya rescued a young boy, Shirou, whose memories and sense of self were lost in the fire that followed the destruction of the Corrupted Grail. Seeking redemption, Kiritsugu adopts the boy, but passes away five short years later, leaving the boy with only his old dream of becoming a Hero of Justice to follow, and an incomplete knowledge of magecraft to fulfill it.

Ten years after the fourth war, a new Holy Grail War begins. Tokiomi Tohsaka's daughter, Rin, has prepared to enter it for most of her life, but runs into a last-minute problem. Despite aiming for getting a Servant of the Saber class, she ends up summoning one of the Archer class due to an oversight. However, this Servant claims to not know his own identity due to an amnesia caused by Rin's clumsy summoning.

When Shirou witnesses Rin and Archer battle another Servant, he is killed by Rin's opponent in order to preserve The Masquerade. Feeling guilty, Rin uses the magic pendant that her father left her to revive Shirou, only to see him dragged into the war as a Master himself on the very same night. His Servant? Saber — the very same one that was summoned by his adoptive father ten years ago.

The story of this arc focuses more on Shirou's character growth and his relationship with Rin than do other arcs. Most importantly, however, it centers on his dream of fulfilling Kiritsugu's ideal of becoming a "Hero of Justice" capable of saving everyone, which clashes directly with Archer's more cynical and pessimistic view on heroism—a clash that is the key of the identity of the mysterious Servant.

The anime can be streamed legally in several countries via Crunchyroll

and the first season can be found on Netflix. The second season was briefly available on Netflix, but removed in late 2015 before being re-added in 2016. The 2015 Blu-Ray release included extended scenes as well as the light novel Garden of Avalon as bonus content. The American Blu-Ray was announced in July 2015 for an August 2015 release.

Not to be confused with the Studio DEEN movie adaptation from 2010 of the same name.

This page assumes that you watched the Fate/Zero anime, so there'll be unmarked spoilers.

Example of:
Field of Blades