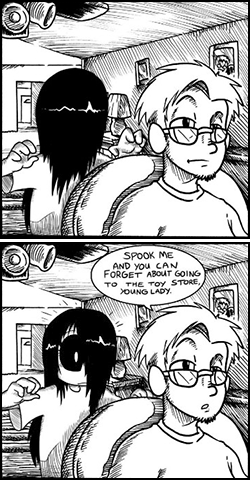 "You get used to it."
— The Priestess, Goblin Slayer
Advertisement:

A character who is conditioned to accept a rather horrible, disturbing fate in life does so with a smile on their face. Why must they engage in this Senseless Waste of Human Life? As it turns out, they've been conditioned for it. Literally. Their life, memories, and personal experiences have all been deliberately designed so that they genuinely enjoy, understand, and accept the macabre world they've been placed in, even as people from a different context are terrified just observing them.

This is a very cerebral trope, as the ability of a person to accept such gruesomeness as commonplace and accept their fate without thinking about it raises a lot of questions about the human condition. Don't be surprised if some authors try to sidestep the issue entirely by having the heroes "educate" the conditioned target as to the right way of thinking.

For specific character types, the Barrier Maiden is sometimes trained this way to get them to accept their job. The Apocalypse Maiden might be told they need to be sacrificed so that they don't, y'know, bring about the apocalypse. Sometimes overlaps with Face Death with Dignity, this person often seems to be a Martyr Without a Cause until the reasons are explained (and sometimes even after).

A common component of Training from Hell and The Spartan Way. Overlaps with Let's Meet the Meat when the horror part comes from a food source being sapient. Can be part of a Crapsaccharine World. Compare with Epiphanic Prison and Safety in Indifference.

See also Blank Slate, Nurture over Nature, Misery Builds Character, More Than Mind Control, Rousseau Was Right, Stockholm Syndrome, Dissonant Serenity, Then Let Me Be Evil, Freudian Excuse Denial and Too Broken to Break. A sister trope to Seen It All.

Compare and contrast with Weirdness Censor and Perception Filter, where the mental impression of horror is diminished, but the emotional reaction to said horror is unchanged.