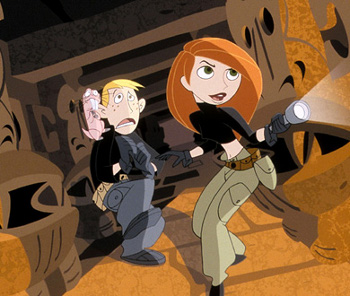 Non-Action Guy and his Action Girlfriend.
"Seven years, Dawn. Working with the slayer. Seeing my friends get more and more powerful. A witch. A demon. Hell, I could fit Oz in my shaving kit but come a full moon, he had a wolfy mojo not to be messed with. Powerful. All of them. And I'm the guy who fixes the windows."
— Xander, Buffy the Vampire Slayer
Advertisement:

A Non-Action Guy is a male who is not heavily endowed with a certain quality that's expected of males in shows; usually courage or combat ability. He's usually a sidekick; often to the Action Girl (or Action Girlfriend), or sometimes to an entire Five-Man Band. Expect him to need occasional rescuing. This combo has the added danger of the audience seeing him as The Chick, a role that can de-masculinize him or just make him annoying in the eyes of viewers.

The Non-Action Guy seems much more likely to be played for comedy than the traditional female version of The Chick. While women are not expected to kick ass (and thus those that do are exceptional), men often are—so a Non-Action Guy's lack of ability is written as something to laugh at.

Often he'll either grow into a more action-oriented role, become ignored, or become the Butt-Monkey as punishment for his failure at masculinity. A common, more acceptable practice is to put him on the Mission Control, where he can be of actual help without having to use any sort of action skill.

To avoid the negative connotations associated with this character type, it might be combined with other tropes such as the Loveable Rogue or The Smart Guy where such a character may be unsuitable for action due to age, build, infirm, upbringing, or simply because it would be a waste of his talent. However, they make up for it by being a Guile Hero, The Chessmaster, or The Strategist. It sometimes goes hand in hand with Con Men Hate Guns or Thou Shalt Not Kill. The Non Action guy on a team may not literally be "no-action", but they may be the weakest member as far as offensive power is concerned. But it's not really what they are there to do. They may make up for it by using purely psychological tactics. They may also be a Terror Hero or a Master of Illusion, deception, or any various methods of combat on the cerebral level. Very often, either a Gentleman Detective or Gentleman Thief. In all other cases, he's Weak, but Skilled.

Expect Fix Fics to be written where his character is changed to fit expectations as a Canon Sue. If he's the protagonist, then he's likely an Action Survivor. If he's the Villain, he's likely a Non-Action Big Bad. In RPGs, he will often be the Utility Party Member. Compare Unfazed Everyman.