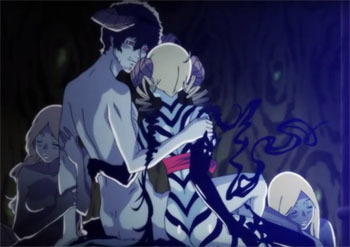 Only the true queen shares the throne.
Maou: I'll take the bed, and you take the floor.
Knight: And Hero?
Maou: The bed, of course.
Knight: That's not even remotely fair!
— Maoyu
Advertisement:

In polygamous cultures, it's common to see one spouse (usually a wife) emerge as the leader and/or "favorite" of all others. In some societies, this status is automatically bestowed upon the first spouse or the spouse which conceives the first heir. In others, it's determined by who yields the most influence or holds the most sway over the shared spouse. And in still others, it's the spouse with the highest social status who gets to hold the highest rank.

If there's dissension amongst the harem, the spouses will fight over who gets to be the one at the top. This is usually because the top spouse enjoys privileges, authority, or prestige that is denied to their "sibling" spouses. In softer examples, the top spouse may be the one who occupies their lover's bed the most, or the only one who does so at all. In extreme cases, they may be able to boss the others around or even kick them out of the harem altogether.

Another common variation is the "Legal Wife", where only one lover is considered the true "spouse", while the rest are concubines or mistresses. This variation can be common with the Ruling Couple, and can also open the possibility of each individually having their own separate harems. This version most often comes about to avoid a Succession Crisis, since usually only the legal spouse's child can claim the inheritance.

In the Harem Genre, this trope is an evolution of the Supporting Harem, though rarely done because it hinges on marrying all of them being discussed or agreed to as an acceptable outcome. But within the industry, No Romantic Resolution or a single Official Couple are still the most common and favored outcomes. As the genre continues to evolve, however, that is slowly changing.

See Balanced Harem, where this is often avoided to keep the love interests more or less "equal".