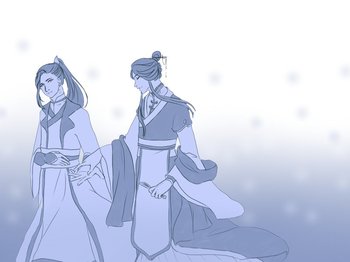 Today was the day of Shen Qingqiu’s husband’s wedding.
It was not, of course, the day of Shen Qingqiu’s wedding. That day had come and gone ten years ago, when a youthful Shen Qingqiu had bowed to a kind-hearted and handsome Yue Qingyuan. Shen Yuan recollected skimming over that description in the novel when he’d read it on a rainy Saturday afternoon, before he transmigrated into Shen Qingqiu’s body.
Advertisement:
Today, the wedding was for Yue Qingyuan’s newest spouse. The love of his life, the protagonist of the tacky romance novel Shen Yuan had consumed, the skilled and peerlessly beautiful Liu Qingge.
It was an event that had, so far as the original goods was concerned, ruined his life.
— Chapter 1

is a The Scum Villain’s Self-Saving System: Ren Zha Fanpai Zijiu Xitong fanfic and stealth crossover with MXTX's published works with inspiration from harem intrigue Media Transmigration novel The Dreamer in the Spring Boudoir published in 2019.

Shen Qingqiu has to watch as the love of his life, Yue Qingyuan, takes another spouse as he is demoted to Second Husband for embarrassing his husband in front of the Emperor in the noble house he helped build. At least, that's what he would be feeling if Shen Yuan, a modern Chinese man who fell asleep cursing a harem intrigue gay romance novel, hadn't transmigrated into him on their wedding day.

In the original story, Shen Qingqiu is punished for his sabotage and attempted murder of the protagonist and new First Husband, Liu Qingge, with the order to commit suicide by hanging himself. Now Shen Yuan vows to protect himself by never romantically approaching Yue Qingyuan, ingratiating himself with the protagonist Liu Qingge, and being a good teacher and parental figure to the poor, abused side character Luo Binghe, who turned on Shen Qingqiu in the original novel.

However, choosing not to play the part of the antagonist that drives the lovebirds together drastically changes things. While Shen Qingqiu tries to use his knowledge of the plot to protect the household, he only read the first volume of the series before he died...

That is the plot of first story, I Wish You Were My Husband

Which is followed an Anachronic Order sequel More Wishes

, a What If? anthology Wishful Thinking

I Wish You Were My Husband has a podfic by lunchee

which is 13 hours long but a delight. Chapter 2 of More Wishes also received a podfic link here

Tropes Shared By The Entire Series

Tropes Unique to I Wish You Were My Husband

WARNING: BELOW ARE UNMARKED SPOILERS FOR 'I WISH YOU WERE MY HUSBAND