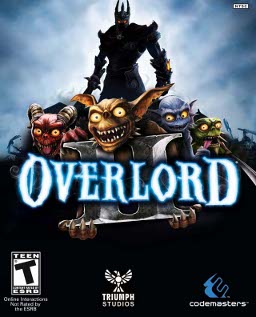 Overlord II is a game in the Overlord Franchise released in 2009 for the Playstation 3 and Xbox 360. Much like the first game this one has a focus on some dark humour (though not quite Black Comedy) and is also written by the daughter of Terry Pratchett, Rhianna Pratchett.
Advertisement:

The game focuses on the son of the first game's Overlord, abandoned in the town of Nordberg where he's shunned for his magic power and evil glowing eyes. One midwinter's festival though, the minions find the child and convince him to embark on a trail of destruction.

The Overlad's rampage doesn't go far as he's captured by the villagers and thrown outside the city walls. Left to die at the hands of the magic-hating Glorious Empire, he escapes only to be frozen when an ice floe breaks beneath him. He's later recovered by his father's former advisor and Dragon Gnarl, and raised to adulthood in the fiery depths of the minion's home dimension of the netherworld.

Now an adult, the Overlad returns to the surface with vengeance in his heart and much weaker morals than his father before him. With the minions at his charge and his axe and magic in hand, he sets out to Subdue or Destroy the town that cast him out and all else who oppose him, and remind the world that they don't need an empire, just an Evil Overlord!