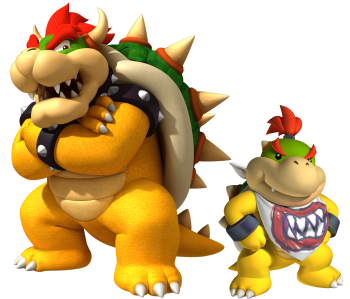 "I will not have a son. Although his laughably under-planned attempt to usurp power would easily fail, it would provide a fatal distraction at a crucial point in time."
— Evil Overlord List, Rule #18
Advertisement:

The male offspring (or nephew) of the bad guy.

Their personality can vary a lot from sniveling wannabe who pushes his familial connections, a kid who idolizes his dad and is more mischievous than truly evil, a carbon copy of their dad, a spoiled Royal Brat, or a selfish scumbag who would kill his own dad to seize power. Could even be a "Well Done, Son!" Guy.

Why are these guys so evil? Is it because of Villainous Lineage, are they being loyal to their father... or do bad guys just make lousy parents?

Often the ones who seek to avenge the villain and sometimes they'll come out of nowhere with no prior hint to their existence. Though it's not uncommon for them to show no concern whatsoever for the death of their parent.

A Sister Trope to Daddy's Little Villain (the Distaff Counterpart to this).

These characters differ from Mad Dictator's Handsome Son in that they almost never change sides and are often truly evil. Contrast Evil Parents Want Good Kids, where the son's evil may mark them as an Inadequate Inheritor to the father.