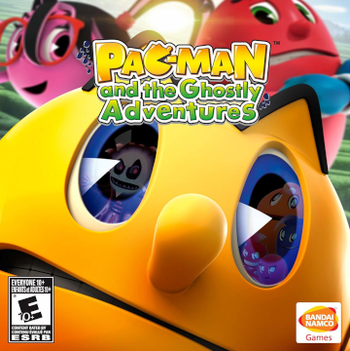 Pac-Man and the Ghostly Adventures is a Platform Game (ala the Pac-Man World games several years earlier), developed as a tie-in for the animated series of the same name (itself an adaptation of Pac-Man, obviously). It was released in October 2013 for Wii U, Playstation 3, Xbox 360 and PC, with a Nintendo 3DS version following in November.
Advertisement:

The Excuse Plot is that Betrayus has led yet another attack on Pac-World, and this time has stolen the Frigidigitator, a huge Freeze Ray capable of transforming entire areas into icy landscapes. Pac sets off to stop him before he can do any more damage.

As Pac, you must run, jump, and chomp your way through several worlds, utilizing the various abilities of the Power Berries to progress further. The console versions are 3D, while the 3DS version is 2D. The console versions also have a multiplayer mode, where four players play the original Pac-Man - as the ghosts.

It saw a sequel the following year, Pac-Man and the Ghostly Adventures 2, this time published simultaneously on the three home consoles and 3DS, while the PC port was cancelled due to the poor reception of the original on that platform.