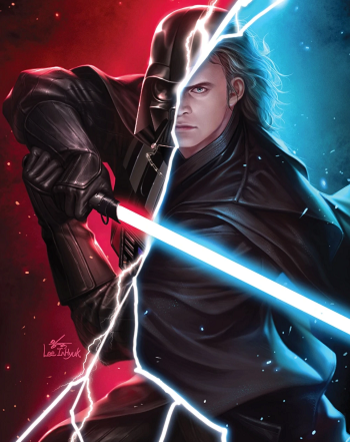 "YOU WERE THE CHOSEN ONE! It was said that you would destroy the Sith, not join them! Bring balance to the Force, not leave it in darkness!"
Luke Skywalker: There is still good in him.
Obi-Wan: He's more machine now than man. Twisted and evil.
— Return of the Jedi
Advertisement:

Not all villains are born. Some are made, and none are more tragic than the Fallen Hero. As the name implies, the Fallen Hero used to be a hero before doing a Face–Heel Turn. They may even have been an Ideal Hero or another equally optimistic archetype, up until the moment when they suffered something bad enough for them to lose all faith in good and idealism, be it the loss of a loved one, too many good deeds coming back to bite them hard, betrayal by someone they trusted the most, too much distrust from those who should have been allies, or some other faith-shattering event. It might even be a drawn out process of seduction to The Dark Side or fall from grace. Some Evil Old Folks happened to be this type in their younger days.

What they choose to do about it determines what they become:

They'll use their not-inconsiderable powers and abilities to do it, too. Often, they'll twist healing powers to evil ends, or allow pain to fester by simply denying the use of their powers for good. Where once the Barrier Maiden wanted to heal the world, she'll now spread misery to speed its destruction. The Messianic Archetype who wanted to save the world now wants its damnation. The Gunslinger, once wanting to bring justice to the frontier, now wants nothing but vengeance and blood. Many of these made the protagonist's journey to villainy.

Usually revealed in a "Not So Different" Remark moment. Almost always gets a Start of Darkness, and often implies Became Their Own Antithesis. Christopher Booker's sixth basic plot, Tragedy, uses this character arc, with the Fallen Hero as the main character. Compare Face–Heel Turn, The Dark Side Will Make You Forget. See also Fallen Angel, Tragic Villain, and Tragic Monster. Super-Trope to The Paragon Always Rebels, in which the character has such influence over other good guys that they fall with him or her. When the Fallen Hero used to be a main character in a previous work, they're a Rogue Protagonist.