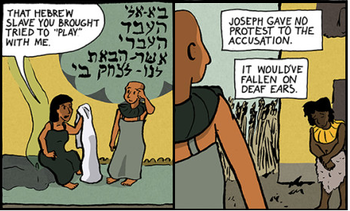 Someone claims to be raped. However, the accusation turns out to be a lie. Depending on the scenario, it can be a matter of this fact already being known by the audience or a plot twist. In the case of the former, the conflict is about the credibility of the accused instead of whether or not rape ever happened. This is a very specific form of a Wounded Gazelle Gambit.

In order to qualify for this trope, the following is required:

There are also a few ways this can play out:

See also either Frameup or Abomination Accusation Attack, depending on how the false rape accusation is done. Compare Unprovoked Pervert Payback, where an Accidental Pervert moment creates a backlash for the offender.

'', Kaylee spots a scar on Jayne’s stomach and recognizes it as a Chinese mark meaning “rapist”. He won’t tell the story but recalls finding a girl he liked being raped by another kid, who he pulls off and punches.The problem is that the other kid is more popular and when he says Jayne raped her, the locals believe it and they hold Jayne down and give him the Mark of Shame instead, despite the girl’s protests. Kaylee doesn’t get the story but says she isn’t buying that he’s a rapist.
Films — Animated
Film - Live-Action
Literature
Live Action TV
Religion and Mythology
Theatre
Video Games
Visual Novels
Webcomics
Western Animation
Feedback