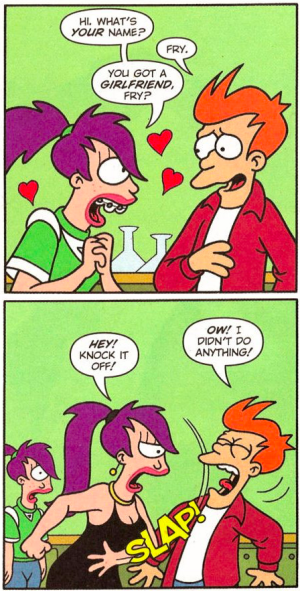 How dare you let her teenage self flirt with you!
"She beats everybody up for literally no reason. At least in some of these shows, there's a pretense, like, he may have accidentally peeked on her in the bathroom. There was no intent there, but he did peek on her in the bathroom. I'm not excusing that, but it was like in this show if they were walking down the same side of the street and she was like, 'Did you peek at me in the bathroom?!' and he would be like, 'Wh-who are you?!' "
— Dave Riley, Fast Karate for the Gentlemen, Show #314: We Cracked the Case!

Closely related to — and generally intended to follow — the Accidental Pervert, the Unprovoked Pervert Payback is a violent maneuver in which an offended girl screams "PERVERT!" and pounds the crap out of a guy for... smiling at her, or any of a hundred other things that are meant to be accidental perviness, but just aren't. Hell, chances are that nothing dirty happened, at all, or even close to it. Tough luck for that poor guy; he's suddenly an Accidental Pervert and ground-zero for the (self-)righteous bitchslap of his life!

Note: This staple of Harem Series is closely related to Pervert Revenge Mode, but has the twist of being completely unwarranted, rather than just undeserved. This is where the producers intended to have an Accidental Pervert joke but failed to include anything remotely identifiable as perversion (boob grab, getting a faceful of female chest, etc.). Often this moment is so badly constructed that the slap comes after everyone concerned knows that nothing perverted happened.

This trope can also be Invoked by any girl causing the innocent man (generally quite some distance away and in full view) to get jumped and beaten up for no reason. Tsunderes who engage in this behavior too often are sometimes classified by fans as "failed tsunderes".

Not to be confused with False Rape Accusation, where no attempt of abuse (accidental or otherwise) was underway in the first place.