Film / The Life of David Gale 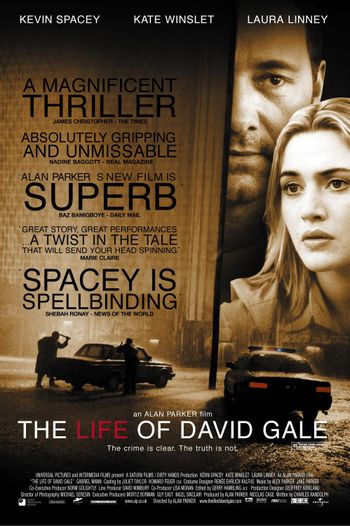 David Gale (Spacey) is a Texas death row inmate, former philosophy professor and anti-death penalty activist. Bitsey Bloom (Winslet) is the reporter he requests to conduct an interview in the last week of his life, before his execution for the rape and murder of his friend, colleague, and fellow activist Constance Harraway (Linney). About half of the film is a flashback as Gale describes the events leading up to his conviction, starting with a rape accusation by one of his students (Rhona Mitra), and claims his innocence. With the help of her intern Zack (Gabriel Mann), Bloom must figure out what really happened and whether Gale can—and should—be saved.

The Tropes of David Gale: