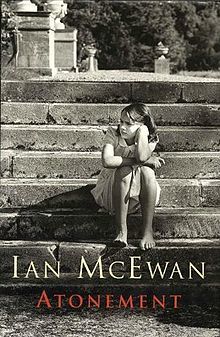 "It wasn't only wickedness and scheming that made people unhappy, it was confusion and misunderstanding; above all, it was the failure to grasp the simple truth that other people are as real as you."
Advertisement:

Atonement is a 2001 book written by Ian McEwan about love, war, writing, guilt and, well, atonement.

Briony Tallis, a young writer from a well-off family, thinks her older sister Cecilia is being sexually harassed by her childhood friend Robbie Turner, also the son of her family's housekeeper. The two are in fact considering a consensual relationship. But the lie she tells leads to lasting, tragic consequences that threaten the happiness of the couple.

A film adaptation directed by Joe Wright and starring James McAvoy and Keira Knightley was released in 2007. For tropes on that, see Atonement.