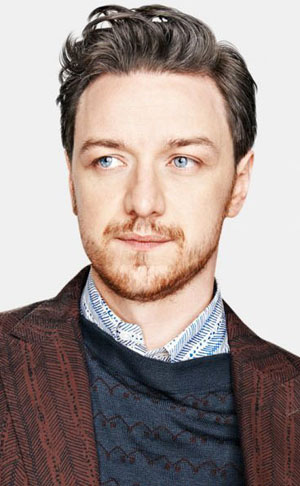 "Every single person in the world is interesting—they're a walking story."
"Where it gets difficult is when you get two or three jobs back to back where you're playing leads and doing 13, 14 hours a day, six days a week, and you suddenly think, hang on a minute, how can you have a life like this? Do I work to live or live to work? How can I work properly with no life to inform the work?"
Advertisement:

James McAvoy (born 21 April 1979 in Glasgow, Scotland) is a Scottish actor who is recognized for a variety of well-received roles and memorable characters. He appeared in a single episode of Band of Brothers, which first brought him to the attention of Hollywood. Children of Dune provided his first experience in a starring role (he portrayed the main character for two of its three chapters). He then jump-started his career in the UK as Steve McBride on Shameless (UK).

From being once solely known by worldwide moviegoers as "that guy who played Mr. Tumnus," McAvoy has since achieved mainstream success and acclaim after starring as the lead in The Last King of Scotland as Dr. Nicholas Garrigan (which earned him the BAFTA Rising Star Award) and the Academy Award-nominated Atonement as Robbie Turner (which led to a Best Actor Golden Globe nomination), as well as box office hits Wanted as Wesley Gibson, and the X-Men First Class trilogy as the young Professor X. His role in X-Men: Days of Future Past is considered by many critics to be one of the finest examples of acting in a comic book movie.

), and has been thrice nominated for the Laurence Olivier Award for Best Actor for his portrayal of the lead character in Three Days of Rain, Macbeth and The Ruling Class. Some theatre critics have even stated that James' stage work is superior to his strongest film roles.

McAvoy describes himself as "not ugly, but not your classic lead man, Brad Pitt guy." He is well-known for his striking blue eyes

, red lips and crying in pretty much every movie he's ever been in.

Tropes associated to his work: