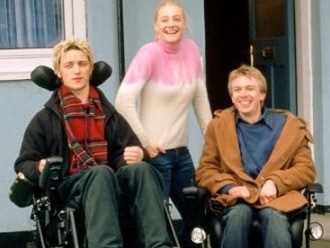 This 2004 drama by Damien O’Donnell (East is East) tells the story of two young disabled men in Ireland claiming the dignity and independence everyone deserves. It stars Steven Robertson, James McAvoy, and Romola Garai.

Michael Connolly (Robertson) is a young Dubliner with cerebral palsy, who lives in a Residential Home for the Disabled, when one day his boring and mundane life is turned upside down by the arrival of also wheel chair bound rebel Rory O’ Shea (McAvoy). Michael realises that the foulmouthed and opinionated Rory can understand him despite his speech impediment and they become friends. They successfully apply for Independent Living Allowance, start living together in their own flat and hire the beautiful Siobhan (Garai) as their caretaker. Difficulties arise when Michael starts falling in love with the girl.

In the UK the film was released under the title Inside I’m Dancing and received mixed reviews, which mostly criticised its predictability while the actor’s performances were praised.