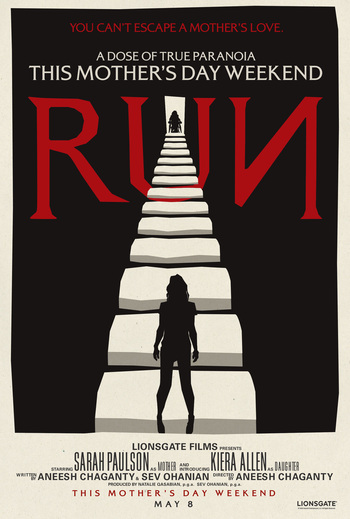 Run is a 2020 psychological thriller directed by Aneesh Chaganty and starring Sarah Paulson and Kiera Allen (in her feature film debut) as mother and daughter Diane and Chloe Sherman.

Due to Chloe's numerous health problems making her all but home-bound, Diane home-schools her, and essentially controls every aspect of her life. Chloe begins to suspect things are not as they appear one day, though, when she discovers a refill of one of her medications actually has her mother's name on the bottle. Things go downhill from there.

Other than sharing a name, it bears no relationship to the YA Novel, the Video Game, the 1991 Patrick Dempsey film, or the 2020 TV Series.