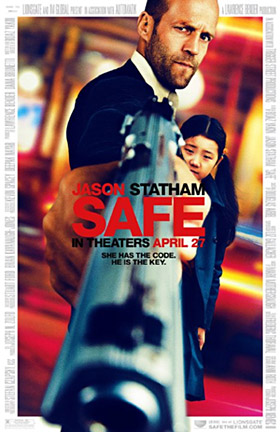 Luke Wright (Statham) is a garbageman and cage fighter who's a little too good at his job; one night, he's put up against a kid with no fight experience and knocks the kid into a coma with one punch. This loses a lot of people a lot of money, including the Russian mob, who kill his wife and put him on the street as a homeless man.

Mei (Chan) is a math prodigy in Shanghai who comes to the attention of the Triads. Instead of using computers to transfer large amounts of financial information, they find it's more sensible to use Mei, who can memorize large random numbers at a glance and keep track of their operations in her head.

A year later, the Russians and the Chinese go to war in New York City over information that only Mei knows. Upon seeing her running from the Russians, Luke takes a hand, and then the kicking happens.

Do not confuse this film with the 1995 drama of the same title directed by Todd Haynes and starring Julianne Moore or the 2018 thriller mystery series Safe (2018).