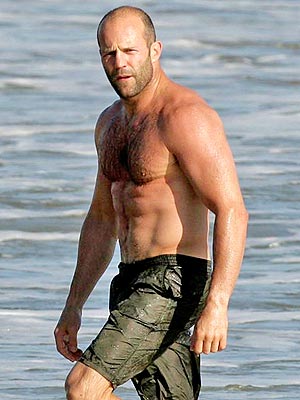 This is him when he's calm. You should see him when he's pissed.
Rachel Brooks: Someone put metal in the science oven.
Tim Gutterson: I finally saw that.
Rachel: What'd you think?
Tim: Needs more Jason Statham.
Raylan Givens: What doesn't?
— The cast of Justified discusses American Hustle
Advertisement:

Jason Statham (born July 26, 1967 in Shirebrook, England) is a badass. Using his accent when saying his name is mandatory.

A resident of the UK, expert kickboxer, and former member of the British high diving team, Statham is one of the few remaining straight-up action stars in Hollywood. He first drew attention for his roles in the films of Guy Ritchie (especially Lock, Stock & Two Smoking Barrels), but became a bona fide star with The Transporter and Crank films; he is also a frequent collaborator with Jet Li and has also done voice-overs for Red Faction II and the original Call of Duty.

His perennial Hollywood character is that of a bald antihero with solid asskicking abilities and a very defined style. Also, a good deal of his non-comedy films can be alternatively titled Jason Statham Drives A Car And Kills People While Scowling A Lot. There are rare occasions that he tries something different, such as straight drama in London and psychological thriller in Blitz.

Holds the honor of being the only major Hollywood action star to NEVER have played a kind, soft-hearted, kid-friendly and/or sensitive character (although they have their own Pet the Dog and Friend to All Children qualities), but judging from the success and popularity of his cold and mean-spirited typecast, he probably never will.