Film / The Fate of the Furious 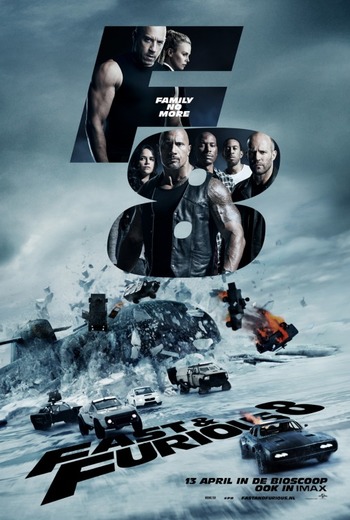 "You're gonna turn your back on family? Just like that?"
— Letty Ortiz
Advertisement:

The Fate of the Furious is the eighth installment in The Fast and the Furious franchise. The title is based on the film's shorthand abbreviation F8.note In keeping with most of the films, it is simply titled Fast and Furious 8 outside the United States, as shown on the poster on this page. It was released April 2017.

The film rejoins the cast during Dom and Letty's honeymoon in Cuba, with the rest of the team exonerated and presumably retired. That is, until a woman named Cipher (played by the franchise's first Oscar-winning addition to the cast, Charlize Theron) — an anarchist, high tech terrorist, and professional criminal, who leads Dom back to the world of crime he'd left behind and the crew (sans Brian) are forced back into action to stop Cipher's schemes.

The film is directed by F. Gary Gray (of The Italian Job (2003) and Straight Outta Compton fame), and reunites Gray with Theron and Statham, who he worked with on the 2003 Italian Job remake.note Ironically, Fast Five is a reworked version of what was meant to be the sequel to said remake titled "The Brazilian Job", so this more or less brought things full circle..

The Fate of the Furious contains examples of: