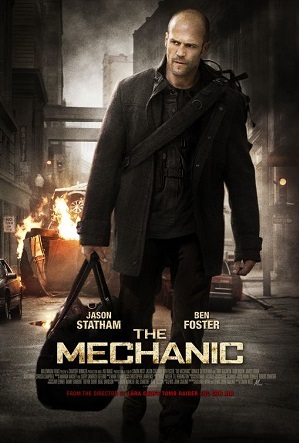 The 2011 remake of the 1972 action film, starring Jason Statham as Arthur Bishop and Ben Foster as Steve McKenna.

After reluctantly assassinating his mentor and apparent mole Harry McKenna (Donald Sutherland) at the behest of his superior Dean Sanderson (Tony Goldwyn), Arthur Bishop takes in Harry's son Steve as an apprentice and trains him to be a fellow mechanic.

A sequel, Mechanic: Resurrection, was released on August 26, 2016, with Statham reprising his role, with Michelle Yeoh, Jessica Alba, and Tommy Lee Jones joining the cast. Bishop is forced back into the business by his Evil Former Friend Hugh Crain when Crain kidnaps Bishop's girlfriend Gina Thornton (Alba), and is sent by Crain to eliminate arms dealers across the world.