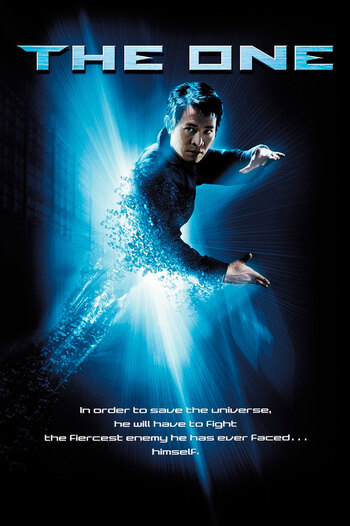 "There is not one universe, there are many; a multiverse. We have the technology to travel between universes. The travel is highly restricted and policed. There is not one... you, there are many. Each of us exists in present time in parallel universes. There was balance in the system, but now a force exists who seeks to destroy the balance so that he can become... The One."
— Opening Monologue
Advertisement:

An action movie from 2001, starring Jet Li and Jet Li with Jet Li in a minor role, born in the wake of the Matrix-inspired Bullet Time craze, directed and co-written by James Wong.

The story takes place in a multiverse composed of 125 parallel worlds. In the backstory, Gabriel Yulaw, a former interdimensional law enforcer, is forced to kill one of his other selves in self defense. This action accidentally leads him to discover that when this happens, the life energy of the slain self is redistributed among the surviving versions of that person, making them stronger and faster. Soon afterward, he drops out of the force and begins actively hunting down all his alternate selves in order to become the most powerful being in existence. He makes it to 123, and only a single target prevents him from becoming... the One.

There is not one trope... there are many; a tropeverse: