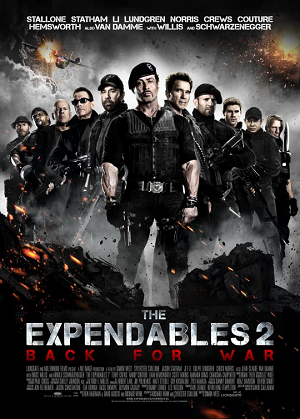 The 2012 sequel to The Expendables.

Opening with a mission to rescue a Chinese diplomat and introducing the new member to the team Billy the Kid (Liam Hemsworth), Church confronts Barney and demands a new mission to redeem him from the issue with how he handled the job in the previous movie. They are paired with Maggie Chan (Yu Nan) to recover sensitive information regarding a secret plutonium stockpile in Eastern Europe. Their mission is upset by Vilain (Jean-Claude Van Damme), a terrorist for hire leading his own team including his second in command Hector (Scott Adkins). Vilain humiliates the team and leaves one of them dead, with the rest vowing revenge. They chase after Vilain to stop his plans and are joined by lone wolf ally Booker (Chuck Norris) to finish the job.

The Expendables 2 provides examples of: