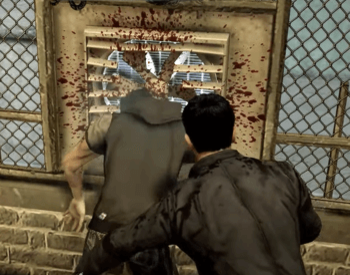 Fan blades are dangerous. So dangerous, in fiction, that if you get too close, even a humble household ceiling fan might take your head clean off. Sometimes the blades are sharp or serrated, but the most blunted of fans turn into deadly shredding machines when moving fast enough.

These are most commonly encountered in narrow spaces where they cannot be easily avoided, sometimes as part of a Death Course. In video games, it is sometimes possible to slow them down or break them by jamming a rod or beam between the blades, allowing the player to get past. Some characters employ them as weapons. They can also be deadly if a rope is involved, with one end looped around the victim and the other end looped around the axis of the fan.

This is Truth in Television to an extent, as metallic fans, including airplane propellers, can be very destructive and very deadly; after all, this is the same principle on which a blender or lawnmower operates. That said, in fiction, this effect tends to be greatly exaggerated; an ordinary domestic fan with ordinary plastic or wooden blades typically won't give you worse than a nasty bruise, and in some cases, the fan itself suffers more damage.

Supertrope of Helicopter Blender and Turbine Blender. Compare Deadly Disc. Not to be confused with Paper Fan of Doom or that Urban Legend

prevalent in Korea that says sleeping in an enclosed room with a fan on can be fatal.