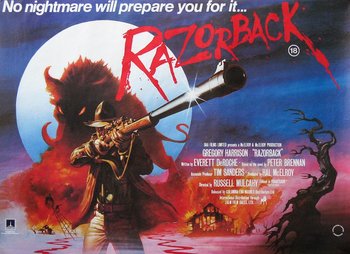 Full-Boar Action, headed your way.
"Arguably the best film ever made about a giant man-eating hog."
—TV Guide
Advertisement:

Razorback is an Australian New Wave horror film from the year 1984. It was directed by Russell Mulcahy, who also did the first two Highlanders, the film adaptation of The Shadow and Resident Evil: Extinction.

Events take place in the Australian outback, where the titular gigantic wild boar dwells. In the opening segment, the boar attacks old hunter Jake Cullen's (Bill Kerr) house, killing his grandson in the process. He tries to tell the truth about the attack, only to be accused of murder. After his acquital due to lack of evidence, Jake vows revenge and sets out to kill the beast and every other boar that comes to his sights.

Later, an American TV-journalist Beth (Judy Morris) comes to the area to investigate the local Petpak pet food factory due to alleged acts of animal cruelty. She gets in trouble with the factory's employees and becomes the boar's victim. Her fiancee Carl (Gregory Harrison) follows her trail to the area and is caught up in the whole thing.