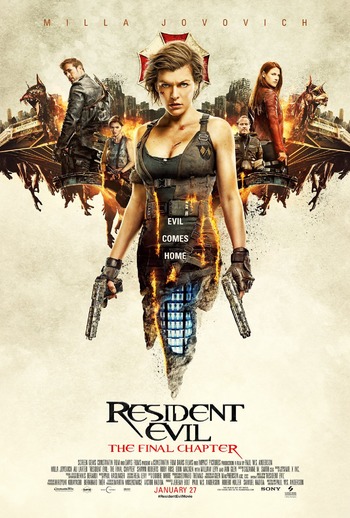 Evil comes home.
"My name is Alice, and this is my story—the end... of my story."
— Alice, from the international trailer
Advertisement:

Resident Evil: The Final Chapter is the sixth and, according to director Paul W.S. Anderson, final installment of the Resident Evil Film Series. Anderson returns to the director's chair for the fourth time in the series, and Milla Jovovich returns as Alice, the central character of the series.

After the events of Retribution, Alice and a handful of fellow survivors have become humanity's last hope of survival. And that hope is running dim, as the Umbrella Corporation plans to wipe out whatever life is left on Earth. Alice's only chance to stop Umbrella once and for all lies in the heart of the company's last remaining stronghold: The Hive, still operational beneath the ruins of Raccoon City.

The film was released in Japan in December 2016 and the United States in January 2017.