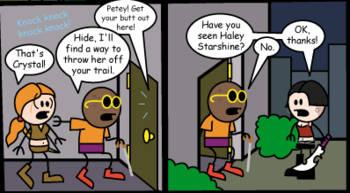 "Don't worry — I'm on your side. A violent death is the last thing that'll happen to you."
— Mr. Teatime, Hogfather
Advertisement:

If you can't or won't lie, it can be hard to keep your secrets. But fear not, because there are ways to pull the wool over another's eyes without speaking a single untruth.

Sometimes, you can tell the truth but no one will believe you because the truth is simply too weird. Other times, you can tell the truth in a tone of voice which makes everyone assume you meant the opposite. And if you are careful with your phrasing, you can pull off the highest verbal coup of all: to tell the truth, clearly and plainly, and still make everyone assume you meant something else. If others accuse you of being dishonest, you can stand behind the bulwark of your completely truthful Exact Words. Maybe they should pay more attention next time — if there is a next time...

A character who is told they'll get "what's coming to you" or "your just deserts" is almost always on the receiving end of this trope. At this point, in fact, such lines feature almost exclusively in comedies, since it's just too implausible that characters in a serious drama (i.e. responding to dangerous situations with appropriate caution) wouldn't recognize the threatening subtext behind such phrasing.

Needless to say, a villain who prides himself on his honesty considers this good form ("Alice can't come to the phone right now. She's all tied up at the moment"), but it's not strictly a villainous trope. Heroic characters can give False Reassurance, too; particularly when they have a secret to keep, but can't or won't lie to their loved ones' faces. For example, Clark Kent might tell Lois Lane, "Don't worry. Clark Kent won't be seen outside this tropical resort," which does not bar Superman from going to investigate the mysterious temple.

The key trope to many a Deal with the Devil. Subtrope to Double Meaning. Compare Prophecy Twist, No Man of Woman Born (where a prophecy of triumph or doom gives False Reassurance to its target because it seems like it can never come true), Metaphorically True, Exact Words, Stealth Insult, and You Said You Would Let Them Go. See also New Era Speech and Worrying for the Wrong Reason. The Self-Poisoning Gambit often relies on this. Contrast Suspiciously Specific Denial, Assurance Backfire, and Empty Promise.

Wilhelm does indeed show up at Karl's home that night. He brings other members of the Nazi Party, and Karl is arrested and deported to a concentration camp.