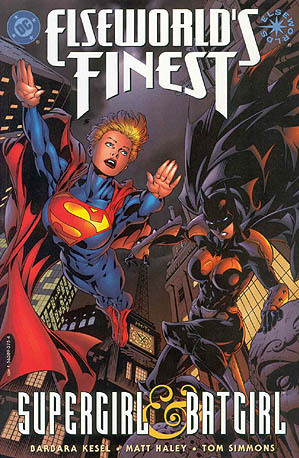 Two heroes, different as night and day.
Batgirl, fierce protector of Gotham City, trusts no one... least of all super-powered crimefighters.
Supergirl, protégé of Metropolis magnate Lex Luthor and JLA member, trusts far too easily.
When a kidnapping draws Supergirl to Gotham, the two heroes must save Lex Luthor from the clutches of the Joker... if they can find a way to work together.
Advertisement:

Elseworld's Finest: Supergirl And Batgirl is an Elseworlds Superman/Batman crossover written in 1998 by Barbara Kesel, Tom Simmons and Matt Haley and penciled by Matt Haley. It's also possibly the first Supergirl (Kara Zor-El) and Batgirl (Barbara Gordon) team-up written after the Crisis on Infinite Earths.

In an alternate universe in which Bruce Wayne was never Batman, and the infant Kal-El did not survive long enough to become Superman, the orphaned Barbara Gordon becomes Gotham's near-dictatorial protector, and Kara Zor-El — the Girl of Steel — teams with Lex Luthor and the Justice Society.

After creating her Secret Identity, Batgirl banished parahumans and parahuman crime from Gotham. However, when The Joker kidnaps Lex Luthor, Supergirl decides to defy the ban to rescue her mentor. However she has to convince a distrustful Batgirl to work together.

As they team up, both women will discover several dirty secrets Luthor was keeping from everyone, and they'll find out that they are not so different after all.

Batgirl: And Kara? ... You'll survive this. He just knocked you off your cloud, that's all.
Supergirl: And you... you came out of your cave to help.