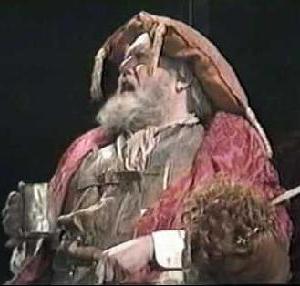 "I am the Prince of Wales, and thinke not Percy,
To share with me in glory any more:
Two Starres keepe not their motion in one Sphere,
Nor can one England brooke a double reigne,
Of Harry Percy, and the Prince of Wales."
Advertisement:

Henry IV, Parts 1 and 2 are a duology of history plays by William Shakespeare, describing the transformation of Prince Hal (the future Henry V) from a mischievous scoundrel to a Serious King Who Is Serious. His transformation is catalyzed by a series of rebellions: Hal's father, the titular Henry IV, usurped the English throne from Richard II, and a number of his nobles—including Harry "Hotspur" Percy, set up as a Foil to Hal—find it politically convenient to be unhappy about this.

Hal's companion in scoundrelhood, Sir John Falstaff, is one of Shakespeare's most beloved characters.

Adaptations of these plays are sadly rare and hard to find; most of them seem to focus on Falstaff. These include: