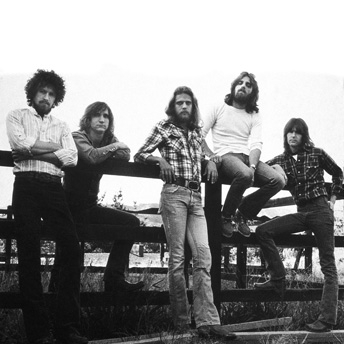 Eagles, circa 1976. From left to right: Don Henley, Joe Walsh, Don Felder, Glenn Frey, and Randy Meisner.
"The theme of all our albums is looking for it, whether it be a woman, or peace of mind, or satisfaction, or success, riches or happiness, or any of that."
— Don Henley
Advertisement:

One of the definitive bands of the American 1970s, and the group behind many of Classic Rock's most iconic and enduring hits, including "Take It Easy", "One of These Nights", "Hotel California", "Life in the Fast Lane", and "Heartache Tonight" to name a few.

They started as a backup band for Linda Ronstadt; the band consisting of guitarists Glenn Frey and Bernie Leadon, bassist Randy Meisner and drummer Don Henley. She noticed that they worked well together, then encouraged them to go on their own. They started out as a country-rock group before moving on to more mainstream sounds and dropping members; Eagles found their way to super-stardom around 1974, the year guitarist Don Felder joined. In 1975, Leadon quit and was replaced by former James Gang guitarist Joe Walsh, and the band would reach their greatest success with the 1976 release of their album Hotel California.

Many of their songs revolve around or at least touch upon the ugly side of The American Dream that nobody talks about, which the band members felt they knew quite a lot about by the middle part of their career. Possibly worth noting is that their first Greatest Hits Album was the best-selling album in United States history for over three decades; its status only changed in 2009 because Michael Jackson died. The band would reclaim the title again in 2018, which also led to said greatest hits album surpassing AC/DC's Back in Black as the second biggest-selling album in the world. Randy Meisner quit in 1977, replaced by Timothy B. Schmit (who also replaced Meisner in Poco). The band broke up following an infamous concert in July 1980 that featured Frey and Felder threatening each other throughout the performance. Each of the members went on (or in Walsh's case, back) to a solo career, although Henley and Frey were the most successful.

It is also worth noting that at their "Hell Freezes Over" reunion tour, Glenn Frey quipped "For the record, we never broke up; we just took a fourteen-year vacation." However, disagreements between Frey, Henley, and Felder would result in the latter's firing in 2001 and subsequent lawsuits against Frey and Henley. Eagles officially reunited to release their first new album in 28 years, 2007's Long Road Out of Eden and have spent much of the time since on tour.

Their instrumental space-country-rock song "Journey of the Sorcerer" (from the album One of These Nights) is famous for being used as the theme song for The Hitchhiker's Guide to the Galaxy.

Although Eagles are not primarily considered a country music act, the band has loads of credibility in that department. Three of the band's singles have been top 40 country hits, and Long Road out of Eden was the best-selling country album of 2008. In addition, Eagles' trademark use of layered harmonies has shown up in a very large number of country music bands, from '80s mainstream groups Alabama and Restless Heart, to more recent acts like Alison Krauss & Union Station and Diamond Rio. In 1993, several country singers joined forces to record a tribute album called Common Thread: The Songs of the Eagles; Travis Tritt's decision to include the 1980 line-up in the video for his cover of "Take It Easy" is said to have been a catalyst in the band's 1994 reunion. In addition, Henley recorded two duets with country superstar Trisha Yearwood. The band's mix of country and rock has also had an obvious influence on modern country adopting rock influences as well.

On January 18, 2016, Glenn Frey died while recovering from surgery, at the age of 67. After the band took part in a moving tribute performance with Jackson Browne at that year's Grammy Awards, Don Henley stated the band was more or less over... but shortly afterwards, it was announced that the band would continue to perform, with Glenn's son Deacon taking over his father's role and country singer Vince Gill contributing as well.