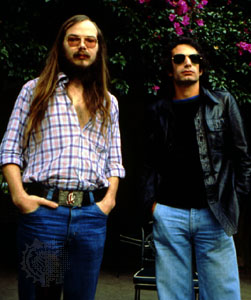 for where the name came from, however considering their reputation, and their site's content, it's a bit of a toss up as to which story is really true, and if you ask them, they'll probably just play along.)

The band is known for a string of hit singles released from 1972 to 1980. The duo split in 1981 and reunited in the early 1990's, with the band releasing their first album in 20 years, Two Against Nature in 2000. That album won them four Grammy Awards, including Album of the Year. The group was inducted into the Rock & Roll Hall of Fame in 2001.

Steely Dan was praised for the sophistication behind their studio work (they rarely toured) and the complex nature of their sardonic lyrics, which starred a cast of dysfunctional characters. Fagan and Becker would reference their own experiences within the lyrics, including cryptic shoutouts to their favourite drinks, colleges they attended, and people they knew personally.

Becker died on September 3, 2017 of undisclosed causes at age 67, shortly after having an operation whose exact nature was also undisclosed. Fagen has said he will continue the band on his own.

Their best-known songs (or at least those most often heard on the radio) include:

"You go back, Jack, and Trope it again":