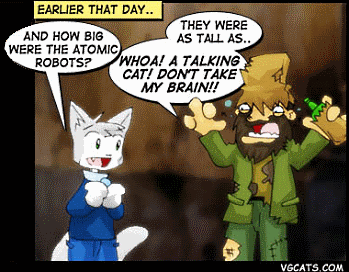 "Still I sing: bonnie boys, bonnie mad boys
Bedlam boys are bonnie,
For they all go bare and they live by the air
And they want no drink nor money"
— Steeleye Span, Boys of Bedlam
Advertisement:

In media, the homeless are portrayed generally as being mentally troubled. At best, they're harmless Talkative Loons who suffer from Funny Schizophrenia; at worst they're violent drug or alcohol addicts who are more interested in getting their next fix than getting long-term help.

Technically, such a character may not even be homeless: sometimes they do have an apartment or other place to live. Their defining trait is that instead of living like an ordinary person (i. e. going to work, having a timetable, etc.), they seemingly aimlessly wander the streets, muttering to themselves and doing other strange things. If such a character is female and beautiful in spite of her unkempt appearance, it is The Ophelia.

Interestingly, the key operating word here is not "homeless", but "people". Usually, when only a single homeless person (or married couple) gets at least half a dozen lines, the view is sympathetic. They're just a character who has fallen on hard times. It's even possible that the hero knows them from before the Big Bad broke the world.

The trope is a partial Truth in Television as the mentally ill are disproportionally represented in the homeless population. The Substance Abuse and Mental Health Services Administration estimates that 20-25% of the homeless population in the USA have "serious mental illnesses". The symptoms of many mental illnesses and addictions can make holding down a job difficult (and the stigma of a former brush with mental illness makes many employers wary of hiring them), and the loss of income may eventually lead to homelessness, while others may clash with roommates or landlords and find themselves getting evicted or struggling to find people who will rent to them or let them move in. The problem is compounded by the Patients' Rights Movement, which makes forcing someone into treatment more difficult than it used to be, and America (and the rest of the world) instituting the policy of deinstitutionalization

with regards to the mentally ill during the 1960s and 1970s. The idea was that with the invention of many psychotropic drugs (Thorazine for schizophrenia, Prozac for depression, Valium for anxiety, Lithium for bipolar disorder, etc), instead of locking up the mentally ill in mental hospitals (possibly for years or the rest of their lives), they would be given medication and sent home, and the money saved would be instead reinvested into community housing and social support programs to help these patients reintegrate into the community.