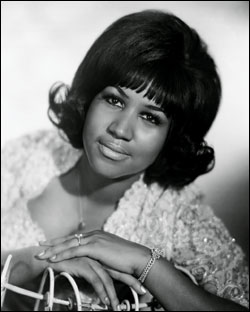 Heeeeey! What you want,
Baby, I got it.
— Respect, opening lines.
Advertisement:

She started her career in the early 1960s. Her breakout hit was "Respect" (1967), a song originally written and recorded by Otis Redding. This song helped define her persona: since it was originally written for a guy, its narrator is naturally more assertive than most female singers were before.

Her other hits include "Think" (erroneously known as "Freedom"), "Chain of Fools", and "(You Make Me Feel Like) A Natural Woman." Some of her many achievements include singing at Martin Luther King's funeral, becoming the first woman inducted into the Rock & Roll Hall of Fame in 1987, standing in for Luciano Pavarotti at the 1998 Grammys with an improvised but showstopping operatic number, and singing at Barack Obama's inauguration ceremony in a hat that took on a life of its own and is now kept at the Smithsonian. She has placed at #1 on both VH1's Top 100 Women of Rock n Roll and Rolling Stone's Top 100 Singers of All Time. She has also done duets with the late George Michael and Annie Lennox of The Eurythmics.

Her appearance in The Blues Brothers and its sequel as the wife of Matt "Guitar" Murphy revamped her career in the 1980s.

She's the subject of the third season of Genius, played by Cynthia Erivo; the original plan was to cover Mary Shelley, but after Franklin's death it was decided to fast-track her season.

She was also involved with a musical biopic of her life, which was in production for several years, with Jennifer Hudson set to star. The film was released in August 2021.

Tropes from works by Aretha Franklin: