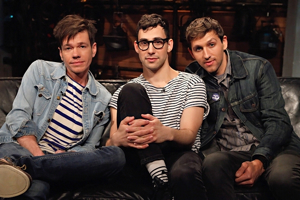 fun. is an American indie pop band based in New York City that was formed by Nate Ruess, formerly of The Format. After the 2008 breakup of The Format, Ruess then formed fun. with Andrew Dost of Anathallo and Jack Antonoff of Steel Train. fun. has released two albums, their debut Aim and Ignite in 2009 and their latest Some Nights in February 2012.

The band's popularity exploded in 2012 when the song "We Are Young" was featured on the TV show Glee. This exposure to a large audience almost immediately resulted in the song becoming popular radio and digital sales. The song became one of the most popular songs of the year, along with the follow up hit "Some Nights". Their final hit song was "Carry On" in early 2013. This also coincides with their departure from Baroque Pop.

The album Some Nights has been critically acclaimed (as was Aim and Ignite) with Nate's wide vocal range and harmonies as well as its unique combination of classic rock and modern hip hop influences. They have a strong knack for Lyrical Dissonance, and Nate has been compared to Freddie Mercury several times in terms of vocal flexibility. They are poppy, upbeat, yet dark, emotional, clever, funny, creative, and most of all fun.

On February 4, 2015, the band announced on Facebook they are taking some time off to pursue other projects, but are otherwise not splitting up. Ruess released a solo album, Grand Romantic later that year. Antanoff, however, has been the band member with the higher profile during the hiatus: His side-project band Bleachers had two hit rock radio singles off their debut album Strange Desire and he's also co-written and co-produced albums and singles for Taylor Swift, Lorde and Sara Bareilles.

Some nights, I stay up troping in my bad luck: