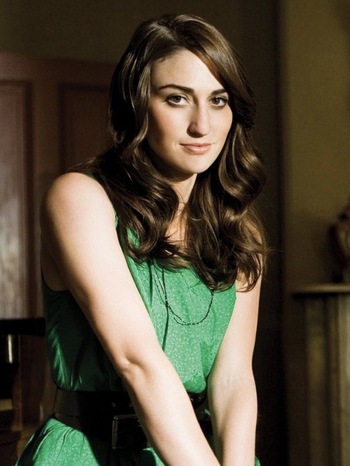 "I think the real question is, does everyone who knows me still think I'm strange? And the answer is yes. I don't feel famous except every once in a while. I'm glad I don't. I don't like it very much."
Advertisement:

Since hitting the mainstream with her 2007 hit single "Love Song" she's struggled to find quite as much chart success as with her debut single, but a dedicated fanbase and a collection of irresistible tracks has kept her from maintaining a "One-Hit Wonder" status. She's had three Grammy Award nominations (two for "Love Song" and one for "King of Anything"), played for former President Barack Obama and his family twice, and has little trouble selling out venues across the globe.

Sara has been reminding people that she exists lately with hit singles "King of Anything," "Uncharted," and now "Brave," proving that maybe singer-songwriters have some staying power in the industry after all.

Bareilles, an alumna of the a cappella group UCLA Awaken, also served as a judge on the third season of NBC's The Sing-Off, along with Ben Folds and Shawn Stockman of Boyz II Men. In 2018, she portrayed Mary Magdalene in NBC's live production of Jesus Christ Superstar, earning an Emmy Award nomination for Outstanding Supporting Actress in a Limited Series or Movie.

Trope what you want to trope, and let the tropes fall out: