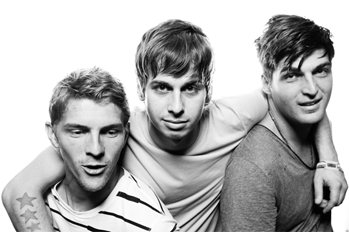 Foster the People is an American band from Los Angeles, formed in 2009. They were originally called Foster & the People; their name was eventually changed to its current state after people misheard it as such. Founding member Mark Foster liked it so much (due to its nurturing connotation of "curing the people"), so he just stuck with it.

Along with fun.'s "We Are Young", the sudden ascent of their Black Sheep Hit "Pumped Up Kicks" is supposed to have either heralded the arrival of Generation Y's second phase or spelt the death knell of indie rock. Or both. Either way, Hipsters everywhere were dismayed to hear "their" music get mainstream airplay.

The band's members include:

Songs/music videos with their own pages:

Tropes associated with Foster the People: