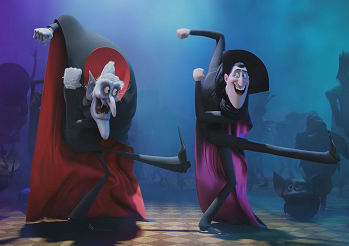 "Tonight, we're gonna party like it's 1734!"
"It's just another night at the Vampire Club."
— Voltaire, "Vampire Club"
Advertisement:

Vampires apparently love to dance (after all, The Dead Can Dance), which is why so many shows that feature the blood-sucking fiends also feature a big dance floor, often ones they own. Often, the dance floor is lined with mirrors, just so the vampire's innocent, unaware dance partner can twig to the fact that there's a reason the guy she's dancing with is so pale.

Sometimes Played for Laughs. Most of the time, though, it's Paranoia Fuel. A Sub-Trope of The Dead Can Dance. Can overlap with Vampires Own Night Clubs.

For another meaning of "blood on the dance floor," you want Ballroom Blitz.