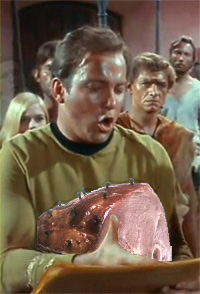 One ham singing an ode to another.
"Nicolas Cage approaches every role the same way — how wouldn't a real person tackle this situation? This is often executed on camera by a series of facial spasms to shame even Jim Carrey or a Tex Avery cartoon, as Cage contorts and tics his way through a series of either unrestrained emotion or unpleasant bowel turmoil."
— Cracked, "4 Celebrities Who Are Clearly Trolling the World"

While Narm is their primary flaw, the large hams are likely to have come from Hillshire Narm. (Go Keet!) But more often these actors are Narm Charm. A few moments of over-acting do not make a Large Ham. The actor must, to all intents and purposes, be deliberately playing the character that way.

A Large Ham may occasionally be an example of Crazy Is Cool. Often a character trait of the Boisterous Bruiser. Deviled Hams also enjoy getting Drunk on the Dark Side. A Smug Super relishes showing off their power this way. Reality Is Unrealistic: a lot of real people are melodramatic or overly emotional. It is therefore NOT unrealistic at all for a character to be this way, despite how it may appear and what plenty of amateur critics will say. The major reason this is often criticized is actually because being melodramatic can be very annoying. But what these critics forget is that a well-written character is not necessarily a likeable one. Writing a hammy character is NOT bad writing. It's only bad writing when the hamminess makes no sense.

Just so it's noted, just because a character/actor is hammy does not mean they are bad or ridiculous -- far from it!

Georgette the show poodle sings about beautiful and beloved she is.

Example of:
"I Am Great!" Song

Georgette the show poodle sings about beautiful and beloved she is.