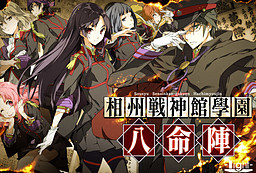 A visual novel developed by Light, written by Takashi Masada and illustrated by G Yuusuke. Also has a sequel, Soushuu Senshinkan Gakuen Bansenjin.

Yoshiya has been seeing continuous lucid dreams every night since he was small. Even though his mind doesn’t get to rest during his ‘sleep’, he still doesn’t experience heavy fatigue nor have ill health. Instead, he is brighter and more capable than other people his age. He thought of his special ability as one of his good points, and intended to live a relatively normal life. That was until he met Mizuki, who also had the same ability as him.

They were able to enter the dream world at will, but soon they found themselves caught in a world which could kill people and change history. It was a world from which one cannot escape. They were faced with the choice of either giving up and taking their own lives or to charge forward and try to break through this nightmare. However, they all felt like they were not caught up in this absurd situation by chance, but rather because it was their own wishes.