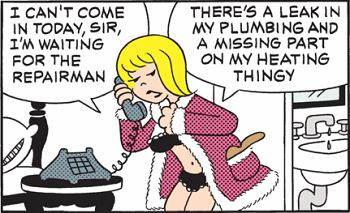 A lingerie scene is one in which a female character removes her clothes to reveal undergarments. This exposes (and may create or enhance) cleavage and usually quite a bit of skin, but still hides those indecent things known as "nipples" as well as some other body parts, so it is not as risqué as a topless or nude scene.

In most cases, the titillation factor intended seems to be at least as high as if a man had gone shirtless in the same situation. Sometimes the lingerie actually adds a titillation factor compared to outright nudity, perhaps because you are seeing something you are not supposed to see, because the figure-shaping effect of some undergarments makes the actress conform more closely to the current (conventional) fashion ideal, or perhaps because, like other Stripperiffic clothing, the lingerie draws attention to what it hides.

The trope was very common in adventure (especially Westerns), comedy and romance films from the late 1940s through the 1960s, especially in movies set in pre-20th Century periods. Movies of those genres set in the 19th century, particularly the Victorian Era and The Edwardian Era, were particularly prone to feature such scenes because of the elaborate design and trimming of lingerie in those periods, as well as the support and figure-shaping qualities noted above. While The Hays Code restricted the extent to which lingerie could be shown, that particular stricture was more honored in the breach than otherwise, especially as standards liberalized following World War II.

After the infamous Wardrobe Malfunction in 2004note when Janet Jackson's nipple was exposed during the Superbowl half-time show, networks became very conscious of the legal costs of a nipple-slip, and started using lingerie as a substitute for nudity, especially during sex scenes. Where previously a Modesty Bedsheet or other strategically placed objects had ensured that nothing explicit was shown, producers now made it absolutely sure by having their female characters keep their bras (or some other undergarment) on at all times, making the Lingerie Scene more popular than ever.

The trope also has a long and distinguished history in news-strips and comic books, particularly those of the "spicy" variety. For example, as early as 1932 Norman Pett's Jane regularly lost her outer clothing in Britain's Daily Mirror, and on the other side of the Atlantic, Adolphe Barreaux' Sally The Sleuth was another early "strip strip", starting in 1934. By the 1940s, hot-blooded American troops were being entertained by the likes of Bill Ward's Torchy and Milt Caniff's Miss Lace. In the US, lingerie scenes were effectively banned by the Comics Code in 1955, but fortunately, these restrictions didn't extend to the news industry. Mainstream features like On Stage, Apartment 3-G and The Heart Of Juliet Jones spiced up the melodrama with the occasional striptease.

The trope is Older Than Feudalism: there are ancient Roman paintings believed to show brothel scenes, where the women are wearing the Roman equivalent of brasnote a cloth band covering the breasts that was worn as underwear and nothing else.

A Sub-Trope of Fanservice. See also Black Bra and Panties and Vapor Wear.