Film / One for the Money 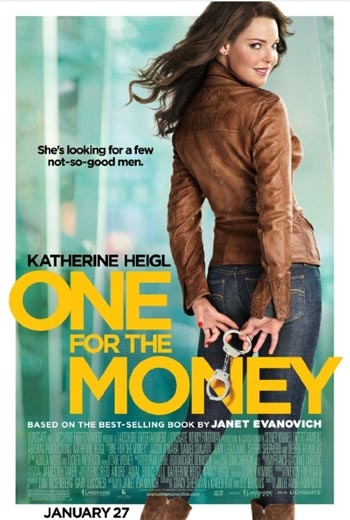 One for the Money is a 2012 American crime comedy film adapted from the 1994 novel of the same name by Janet Evanovich, directed by Julie Anne Robinson and starring Katherine Heigl.

Stephanie Plum (Heigl) is a born-and-bred Joisey girl who finds herself in financial straits when she's fired from her job as manager of the lingerie department at Macy's. After being rejected for a variety of demeaning jobs, she blackmails her bail-bondsman cousin Vinnie into letting her recover some of his bail-jumpers for him.

Taking in small-time quarries for the money, Plum has her sights set on the $50,000 bounty for the capture of her ex-boyfriend, vice cop and murder suspect Joe Morelli (Jason O'Mara). As she gathers evidence to track Morelli, she comes to suspect that he may not actually be guilty.