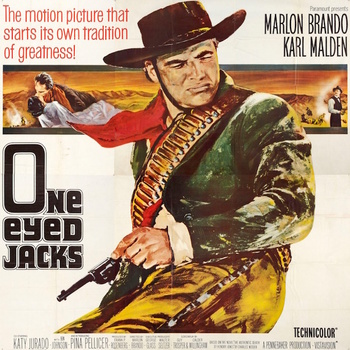 One-Eyed Jacks is a 1961 Western directed by and starring Marlon Brando. Intended to be an adaptation of the 1956 novel The Authentic Death of Hendry Jones by Charles Neider, the film proved to be an In Name Only adaptation with a story that had virtually nothing to do with the source material.note  The Authentic Death of Hendry Jones is essentially a re-telling of the final days of Billy the Kid beginning with his escape from prison and leading up to his death at the hands of Pat Garrett. The book uses different names to represent the characters involved in the incident. Sam Peckinpah was originally attached to the project, and years later he would go on to direct Pat Garrett and Billy the Kid, a film that arguably has more in the common with Charles Neider's book than the film that was allegedly based on it. Incidentally, Slim Pickens appears in both films.

Rio (Brando) and Dad Longworth (Karl Malden) are partners in crime who rob a Mexican bank in 1880. They make their escape but stop running too soon, and the rurales swoop down on them. Dad and Rio flee into the desert, with the cops giving chase; Rio's horse is shot. With only one horse left, Dad and Rio decide that Dad will make a break for it, get a second horse, and come back for Rio. Unfortunately for Rio, once Dad makes his escape with a good horse and a bag full of gold, he decides to keep going. Rio is arrested.

Five years pass before Rio breaks out of jail. Eventually he tracks down Dad, who has not only gone straight, but has become the sheriff of Monterey, California. Rio pretends that there are no hard feelings but secretly plots to both rob the bank in Monterey and kill Dad. Rio's desire for revenge is complicated, however, when he falls in love with Dad's beautiful stepdaughter Louisa (Pina Pellicer).

The only film Marlon Brando ever directed. He took the job himself after having a disagreement with Stanley Kubrick, who had originally been hired for the project.

Not to be confused with novel One-Eyed Jacks.