Film / One from the Heart 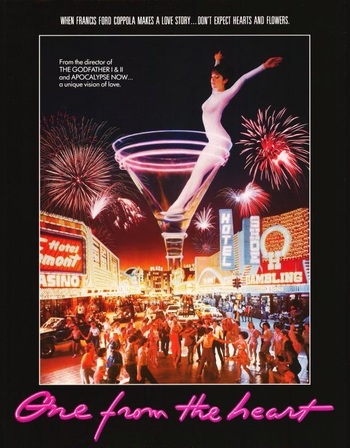 One from the Heart is a 1982 American musical romantic drama film directed by Francis Ford Coppola.

Hank (Frederic Forrest) and Frannie (Teri Garr) are a couple about to celebrate their fifth anniversary on the Fourth of July. However, they have a falling out over their clashing desires, with Frannie yearning for adventure in exotic locals, while Hank wants to stay put and make money. They go enjoy the festivities in Las Vegas away from each other and have affairs with other partners: Ray (Raúl Juliá), a wannabe musician, and Leila (Nastassja Kinski), an acrobat. The question of whether Hank and Frannie will work things out or choose their new partners is up in the air.

The film was a notorious Box Office Bomb that is considered to have contributed to the end of the New Hollywood era and marred Coppola's career; for a long time, he had to make movies specifically to pay off the debts he accrued with this one (from the heart).