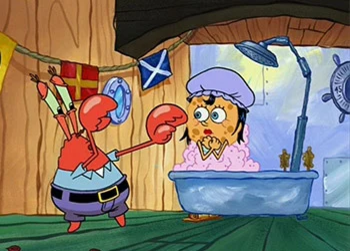 A common Sitcom and Anime trope in which one character accidentally sees another character, usually of the opposite sex, in the shower. Usually, Bob will turn on the water, then leave the room for a moment. Alice, oblivious to Bob's presence, steps into the water and closes the shower curtain. Bob then returns, finishes stripping down, and opens the curtain back up, so they each get a view of the other naked.

Notably, Alice will never stop to think something along the lines of, "Wait a sec, I never turned on the shower..."

Often, but not always, the two characters have a history of sexual tension. If so, the incident typically leads to either an Unprovoked Pervert Payback or awkwardness and mutual avoidance, until they decide to pretend That Didn't Happen. If not, it's at least a source of Fanservice.

Any time someone contrives to invoke this trope, they're almost guaranteed to catch the wrong person and suffer for it somehow, often by exposure to Fan Disservice.

A sub-trope of Shower Scene. Related to Accidental Pervert. Distinct from Naked First Impression in that it's limited to bathroom settings and characters who already know each other. Compare Landing in Someone's Bathtub.