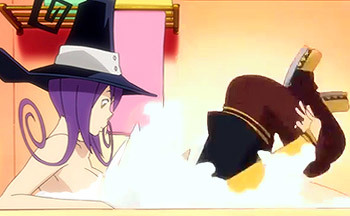 This is when a fully clothed character ends up falling, usually from a great height, and lands in a bathtub in which someone is bathing at the time. The bather is commonly the opposite sex of the person who is clothed, but there are times when they are both the same sex. Most of the times when it is the opposite sex, it ends badly with the bather embarrassed or angry at the clothed person.

This trope also applies to clothed characters that are teleported into someone's bathtub.

May overlap with Naked First Impression.

Luffy ends up in Hancock's bath.

Luffy ends up in Hancock's bath.